The Magic of Christmas (The USA)

Strona Główna > In English  > The Magic of Christmas (The USA)

20 gru The Magic of Christmas (The USA)

December is the coldest month of the year but definitely the most wonderful time of the year too. People create a festive atmosphere in their cities, houses, and backyards. There are plenty of activities to enjoy around this time.

People set up their Christmas lights and decoration much earlier than in Poland, for instance. The sale of Christmas decoration starts in September. And all is arranged in American homes before the Thanksgiving. The Americans do not spare for Christmas decoration. It is certainly big, expensive and the most wonderful decor I have ever seen in my entire life.

The Elf comes from North Pole on a special mission. Each child is under elf surveillance since the 1st of December. He watches the children before Christmas and reports any misbehaviour to Santa. The elf will leave on Christmas Eve. Well-behaved children will get their presents as planned.

It is a town with a Santa theme and is open all year around. Ornaments and sweets are attracting people and children from everywhere. The biggest attraction is the largest and unique display in town. It is the Land of Lights, which is a drive-through outdoor tunnel of LED lights telling the story of Rudolph the Red-Nosed Reindeer across 12 miles (19.3 km). 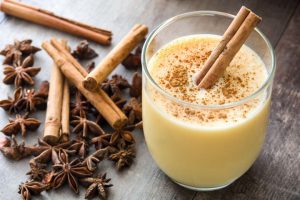 It is  Christmas tradition that the Americans drink eggnog for Christmas. It is a traditional holiday drink dating back hundreds of years. Eggnog is made with eggs, milk, cream, spices like nutmeg and vanilla, and some alcohol like rum, whisky, and brandy. Nog comes from the word grog, which refers to any drink made with rum.

It is easy to make and much healthier than from the shop!

The eggnog base starts by beating egg yolks with sugar until light and fluffy. Then you slowly whisk in hot milk infused with cloves and cinnamon, which tempers the eggs so they don’t curdle. Finally, you warm the eggnog on the stovetop until it thickens.

For a traditional eggnog whip up some egg whites to stiff peaks, and then fold those into the eggnog mixture, making it light and fluffy. Reheat the combined mixture of eggnog base and beaten egg whites until it reaches 160°F (320 °C). Let the mixture chill. Enjoy!

This season I wish you Merry Christmas and a Happy New Year 2020!

Thanksgiving Day– a national holiday celebrated as a day of feasting and giving thanks for divine favors or goodness, observed on the fourth Thursday of November in the U.S. and in Canada on the second Monday of October (Święto Dziękczynienia)

spare – to use economy; be frugal (oszczędzać)

eggnogg – a drink made of eggs, milk or cream, sugar, and, usually, rum or wine  (ajerkoniak)

nutmeg – the hard, aromatic seed of the fruit of an East Indian tree, Myristica fragrans, used in grated form as a spice (gałka muszkatołowa)

egg yolks – the yellow and principal substance of an egg, as distinguished from the white (żółtka jajka)

clove – the dried flower bud of a tropical tree, Syzygium aromaticum, of the myrtle family, used whole or ground as a spice (goździk)

stovetop – the upper surface of a stove, especially the area used for cooking (płyta kuchenna)