Travelling across the Kingdom of Saudi Arabia I came across a very interesting town, Jeddah. It is a city in the Hijaz Tihamah region on the coast of the Red Sea and is the major urban center of western Saudi Arabia. Jeddah is well known as the gateway to Mecca and Medina, pilgrimage sacred cities. It has been an influential cultural hub since early Islamic times. With such rich history come of course many attractions.

First thing I noticed when we landed at the airport was the relaxed atmosphere of the place. People seemed to smile more often and their clothes were less strict as in the other parts of Saudi Arabia. Women were wearing more colourful abayas, not totally black as in Rijadh or Al-Khobar. 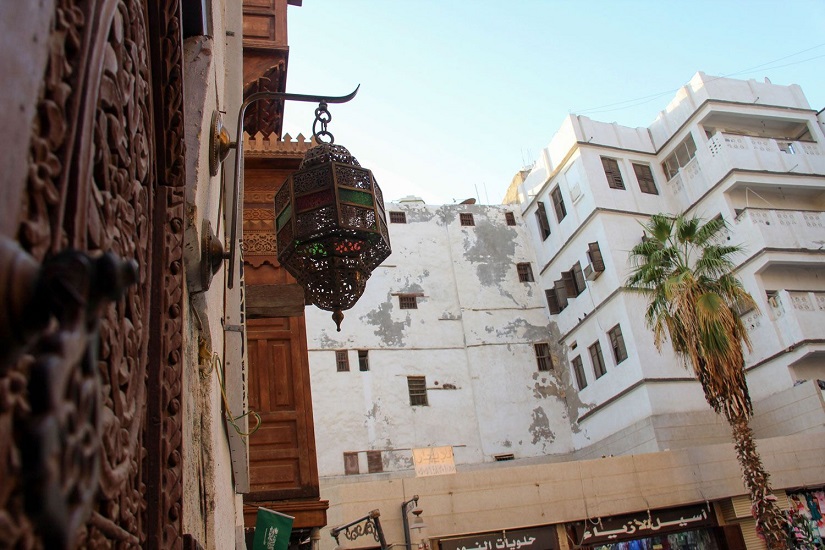 Al-Balad, or old Jeddah, now is a UNESCO World Heritage Site. Once it served as the main gateway to Mecca.  It was here that merchants made fortunes transporting goods and providing passage to pilgrims from all over the world.  Mercantile elites used their wealth to build houses called Roshan tower houses that were made out of coral and have decorative windows and doors.  The unique architecture and the much less frenetic pace make this part of Jeddah an essential and enjoyable visit. The bases of these tower houses are made from rocks quarried from Arba’een Lake. If you only have time to visit one, go to Al Naseef House. Climb to the rooftop to catch the sunset and listen to evening Adhan, call to prayer.

Not far from Bab al-Jadid (New Gate) is a cemetery that serves as the final resting place of Eve, of the famous first couple, Adam and Eve.

The northern side has Fatima Al-Zahra Mosque, also known as the floating mosque, which at high tides gives an impression of floating on the sea. 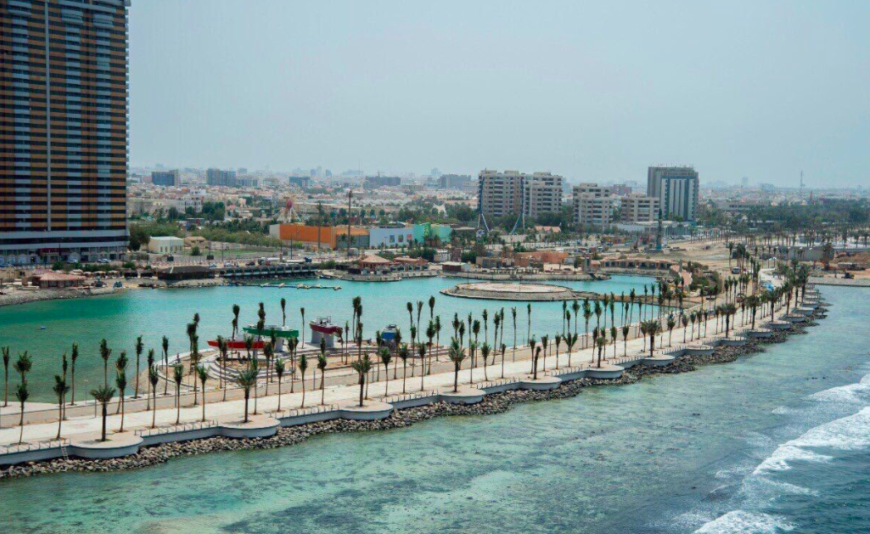 When locals want to enjoy the sea breeze, sunset and a cup of coffee, they go to Jeddah Corniche. It is nicknamed “bride of the Red Sea” and is located alongside the elegant sea. We were absolutely thrilled to see families and the youth out enjoying the lovely sunset. The picnics by the sea are very relaxing and fun. Families sit on elaborate carpets with their thermoses with coffee and little barbecue sets grilling their kebabs or fish. No walk along the corniche is complete without seeing and photographing King Fahd’s Fountain. This saltwater fountain is illuminated at night and visible from all over Jeddah. It is the world’s tallest fountain, shooting water over 300 metres (1,000 f – eet) in the air.

pilgrimage – a journey, especially a long one, made to some sacred place as an act of religious devotion (pielgrzymka)

hub – the effective center of an activity, region, or network (centrum)

merchant – a person or company involved in wholesale trade, especially one dealing with foreign countries or supplying merchandise to a particular trade (kupiec)

rooftop – the roof of a building, especially the outer surface (szczyt dachu)

floating – being buoyed up on water or other liquid (pływający)

high tides – the tide at its highest level of elevation (przypływ)

nicknamed – a name added to or substituted for the proper name of a person, place (przezywany, nazywany)